The totally inofficial guide to Verse on Premises

Now that CNGD8ML is upon us, it is story time. Read about the why, who, what and what to watch out for.

To successfully deploy Verse, make sure to carefully read and implement the installation instructions. The availability of Verse makes Domino the most versatile eMail platform around, offering you the choice of: Notes Client, Outlook, POP2, IMAP4, iNotes, Verse, iOS, Android. Anywhay, here we go:

Verse on premises was a long (out)standing promise to the IBM customer base. Not everybody is ready to embrace the cloud, but interested in the new way to work. In SmartCloud Notes, the backend for Verse in the Cloud, all search is powered by Apache SOLR. If Verse got delivered as is, that would have required substantial hardware and skill investments for the on-premises customers.

So I made a bet with Michael Alexander, whom I worked with on TPTSNBN, that we could use standard Domino capabilities, not requiring Solr. Based on prototypes with vert.x and Java8 we gained confidence and got the go ahead to build the search component as OSGi plug-in (in Java6). So the search part (not the UI or other functionality) is on me.

There were two distinct teams working on the delivery of Verse on Premises (VoP): The core Verse team, that owns UI, functionality and features for both cloud and on premises and the search plugin team responsible to replace the Solr capabilities with native Domino calls.
The former is rather large, distributed between the US, Ireland and China. The later was led by the distinguished engineer David Byrd and just a few core coding members: David, Michael, Christopher, Raj and myself.
We were supported by a team of testers in Belarus and the Philippines. The test teams wrote hundreds of JUnit and Postman tests, just for the search API.

Each project needs a good code name. The original Verse code name was Sequoia, which is reflected in the name of the plugins for core and UI functionality.

The search component, not being part of RealVerse???, needed a different name. In an initial high level diagram, outlining the architecture for management, the search component was drawn as an orange box. Since we "just" had to code "the orange box". The name stuck and led to our code name "Project OrangeBox" (PoB). 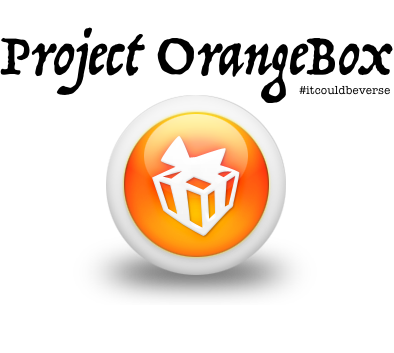 You can find Orangebox and POB in multiple places (including notes.ini variables and https calls the browser makes). So now you know where it is coming from.

We set out to build POB with the following constraints:

To solve the challenges I devised an architecture where any incoming query would run through code determining the execution strategy. If determined feasible, VoP would just read a view or folder (eventually with a category and a date limit).
When that wouldn't fit we hand it off to a fulltext query. Raj designed and coded the Query parser that, for the use cases of VoP, translates the SOLR query syntax into Notes FTSearch syntax. Quite a feast in code, kudos to Raj!

Make sure, you read the instructions carefully. There are a number of preconditions to be met. Missing any of these and VoP will not work for that users. My suggestion to auto-fix some of them didn't make it into VoP 1.0

The users will not get error indicators beyond: "Talk to your admin", but the log files (the one in workspace/logs) will capture details what is missing. It will also log any other errors that might arise. VoP was subjected to thousands of automation test as well as human testing. Nevertheless, it is software, you know where this is going. The PMR system is your friend (and ours too)!

Watching the HTTPS traffic is quite enlightening. I usually use the Chrome tools for it. Go and watch!

To be super clear: Nothing of the data going forth (HTTPS Form submissions) and back (JSON) is documented or guaranteed to stay and can change in any future version (Very much like iNotes, see my articles about that). So don't count on it.

For adventurous souls: the search plugin is using Apache WINK which gives some information away at its base URL /pob/api/search. Go and check it out. Some of the URLs you will find there: