I consider myself an early mobile adopter. I had Casio PDA, Sharp PDA (the first to sync with the PC), a Psyon, the original Palm, a Nokia communicator. Finannyl I ended with a Blackberry 8707. It did eMail very well, the big keys matched my big hands and live was good. Of course even I fall victim to perceived obsolence. The 8707 showed its age. All the new applications like Quickr, Facebook, Tripit etc. wouldn't run and first and foremost: no wifi and no option to keep the phone running while roaming but switch the data off. So I decided to treat myself to a shiny new Bold2 9700 (mostly since Android hasn't been cleared by IBM security yet, at least not here).

It had all I wished for: applications, camera, memory, wifi, roaming. Others praised it as their parachute. Seems mine has a few burn holes and it will be my last Blackberry unless things improve dramatically very soon. I don't know if I just experience the perfect storm of mishapt, but I'm not surprised that 33% of the Blackberry users want to switch to Android and 40% to an iPhone

Ferris analyst Bob Spurzem covers news around MS-Exchange. In this entry he hightlights that MS Exchange 2010 has removed the Single-Instance-Storage (SIS):
One of the lesser-known changes to Exchange 2010 is the removal of single instance storage (SIS). The reason for this is related to an architectural change, disk I/O performance, and the availability of cheap disk.
There tends to be a trade-off between better disk I/O performance and reduced storage capacity. Architecturally, Exchange 2010 introduces a new per-mailbox table structure that replaces the original per-database table structure. The original per-database table structure was optimized for SIS, but disk I/O suffered. The new per-mailbox table structure improves disk I/O, but without SIS.
In place of SIS, Exchange 2010 uses compression. Only large, redundant attachments files truly benefit from SIS; otherwise, compression delivers roughly the same volume of data as SIS."
Well MS sales people always had claimed (never backed by figures from real deployments) that SIS was a space saving advantage over Domino's one-man-one- vote database approach. Guess they learned the scalability lesson the hard way. Now if you want SIS for attachments and design compression and data compression - Domino is your answer.

The most talked about space saving feature in Domino 8.5 obviously is DAOS. The lesser talked space saver is ODS51. ODS51 features (not neccesarily introduced only then): Design compression, document compression, LZ1 attachment compression. I put it to the test with my very own mailbox (happily running R8.5.x and ODS51): 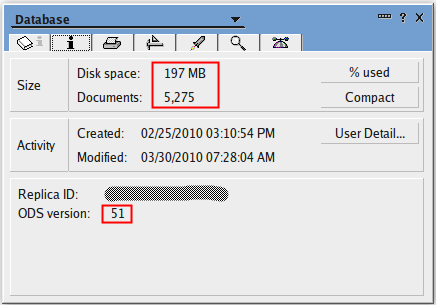 The same database after creating a copy in ODS43 (R6/R7) format. Nota bene: it doesn't contain any view indexes yet! 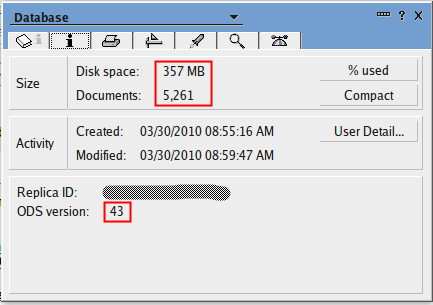 If you do the math: 357 -> 197 => 45% reduction in size. I don't store attachments in my mail file. Files that don't directly go to Quickr, LotusLive or Lotus Connections are taken care of by IBM's My Attachments tool effectively moving them to their own database.

Michael Sampson, teamwork expert, points us to an insight from Nicholas Bate about team performance

Of course good presentations help to show off the good work. Until then focus on 7 pillars and clarity.

It is not enough to translate your software into another language.

You also need to teach it how to recognize Re: and Fwd: or you get the above result

Depending on whom you listen to TCO is the lowest for [insert-your-product-of-passion-here]. Robert Sutton (a must read, yes - every book

) suggest to base management decisions on solid evidence

. So what is part of TCO? Hardware and software prices, real estate in the server room, electricity and cooling, labour for the admin for regular operations, patches and upgrade as well as opportunity cost for downtime. I'd like to shed some light on the hardware side. In a loose series will compare the hardware deployment for various IBM and Microsoft scenarios. For starters I use a comparison of plain Domino with plain Exchange. In a later post I will add mobility, instant messaging, collaboration and whatever comes to my mind. My first scenario is a single location with 12000 heavy mail users who demand high availability. Since I'm not a Microsoft expert I need to poke into public available resources for the deployment diagram and I guess I'll stand corrected in one or the other case. The first thing I had to learn about Exchange is that an Exchange server can have different server roles and that it is considered best practice to split these in large installations. HP's sizing tool for Exchange 2007 was used for the Exchange estimates.
Read more

While discussing AutoUser, the top tool to run functional test for your Notes Client applications, with Lucius (Smart Touchan's CEO) we compared Notes (pun intended) about the state of Notes applications. We identified a phaenomenon which Lucius labeled " frozen Notes applications" (Accenture seems to have still quite a lot of them).
A frozen Notes application isn't one that is crashing or mis-behaving. It is one, mostly at the core, supporting a critical business process with tentacles interfaces in all directions. Since it has grown over the years there are quite some layers and imprints of developer generations in it. It typically does what it should do well, but there is great reluctancy to touch it. Its interface shows signs of age and enthropy. Neither adding or altering features nor moving it to a new version is considered a risk worth taking by the IT people (I actually have seen R4.6 servers still in operation for exactly that reason). Updating this application is what Wikipedia calls Brownfield development (a term borrowed from civil engineering).
What to do in such situations? The tempation is great to just rewrite the whole thing on a platform that is more in vouge. Joel Spolsky has warned against such attempts and reports coming in of rewrites (regardless of what platform, just ask about VB to VB.NET rewrites) are not very encouraging. A step by step modernisation looks more tedious in theorie but appears to be way more robust in practice.
So what is the right course of action? Document your apps (watch this space for an upcoming feature about that) and put them into a test harness. Way back there used to be LoadRunner (not sure if it is still around) supporting Notes clients. Now there is AutoUser wich is capable of testing applications against a multitude of clients. Refactor your applications when adding new features. Lucius is musing to make AutoUser more widely available. I'm looking forward to that.

In the beginning there was C:\Notes and C:\Notes\Data and a notes.ini somewhere in the path pointing to the data directory. And live was good. Over time things became more complex powerfull, the notes.ini moved to the data directory (fun when upgrading) to accomodate multi-user installs. Notes 8 arrived and Notes turned into an Eclipse RCP application uniting the classic C core with a flexible UI based on IBM's Expeditor Framework. Now there is a lot more to Notes (my program directory totalling 23768 entries using 958 MB - that's client including Symphony and Sametime on Ubuntu 9.10). While you still can wipe the program directory and reinstall everything, you want to maintain all data that are relevant. In a recent Domino WIKI entry the meaning and purpose of the structure of your data directory is explained in detail. Makes an interesting read.

What type of Engineer is god?

10 years ago the biggest adventure of my life started. It is still on and I'm still learning. 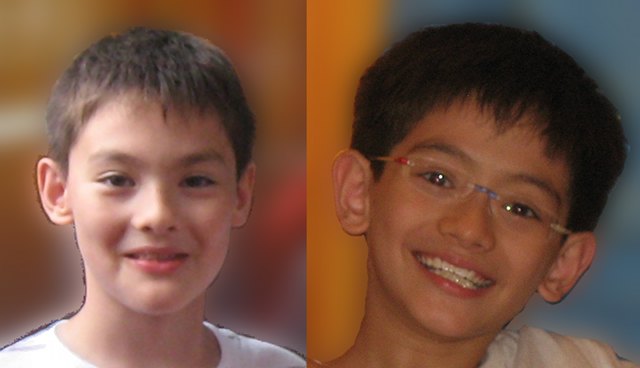 Happy birthday Anthony and Ernest!
Being a geek dad we celebrate with the appropriate present and stuff to chill out afterwards.

). I recently switched to Starhub from SingTel on one of their midrange plans (not the alledged 100 MBPS one), so I was curious and headed over to SpeedTest to check how I'm doing. Locally I got 8.42 Mbps and overseas 5.37 (Boston), 4.76 (San Franscisco) and 5.3 (Texas) Mbps. Should be ample power for any web based application isn't it? Not so fast. Just recall how most of the web 2.0 applications with their Ajax goodness actually work:

(Image shamelessly borrowed from JustGoodDesign.com
You will realize that while you want all the speed you can get for watching video or download files, you want fast reaction to your requests too. Reaction time in the internet is called latency. How long does it take the other side to react. There are many factors influencing latency. Physical distance, quality of lines, number of nodes to traverse, things happening on that nodes (packet inspections, firewall activities) etc. In a local network you can expect latency in the range of less than a milisecond up to 3-4ms. Once firewalls get inbetween figures get higher. Here the Singapore figures (mesured using ) look different:

Locally I got 31ms (just 15x slower than a 2ms local network), overseas between 200ms and 350ms (just 100x and 150x slower than the lan). You can imagine what that does to your "chatty" web2.0 application. While 100 calls in the lan take just a fifth of a second you would need to wait 20sec on the slow connection. Now travel to places sourrounded with great walls or exotic destinations and your app will suck big time. My recommendation for all web2.0 developers: Schedule some time in a remote development facility (Yes people actually write code there) but leave your servers at home.

Boys and their toys VII

The good Movie Bag is loosing shape and SWMBO insists on replacement. SoI had a look at Varier: