Blogsphere allows to create RichText and plain HTML entries. To export them I need to grab the HTML, either the manual entered or the RichText generated on, clean it up (especially for my manual entered HTML) and then replace image sources and internal links using the new URL syntax. To make this happen I created 2 functions that saved images and attachments and created a lookup list, so the HTML cleanup has a mapping table to work with

With images saved the HTML cleanup can proceed. As mentioned before I'm using JSoup to process crappy HTML. It allows for easy extraction of elements and attributes, so processing of links an images is just a few lines

From Blogsphere to a Static Site (Part 1) - Objects

The migration tooling revolves around data, so getting the data classes right is important. The data classes need to be designed to allow it to be populated either from the Blogsphere NSF or from a collection of JSON files (so the blog generation can continue when the NSF is gone). For the blog we need 3 objects:

There will be auxiliary data classes like Config, RenderInstructions, Blogindex. Their content is derived from the data stored in the main object or, in case of Config, from disk. 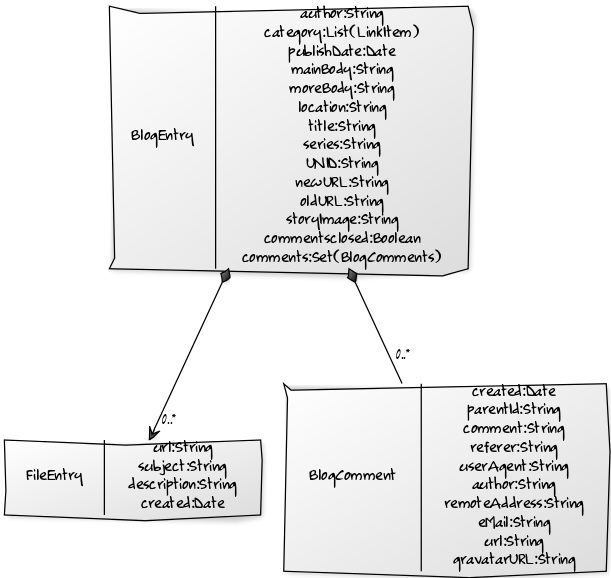 From Blogsphere to a Static Site (Part 0) - Requirements

Readers of this blog might have noticed, that blog layout and blog URLs have changed (a while ago). This blog now serves static HTML pages using a nginx web server (get used to nginx, it's coming in Connections Pink too). I will document the steps and code I used to get there. Step 0 is: define the requirements and evaluate the resulting constraints: I had a look at Jekyll, which is the templating engine GitHub is using. I would have allowed me to just commit a new file and Github would render for me. Unfortunately Jekyll fell short of the article series and category overview pages.
Read more

We all heard the announcements around Project Pink headed by Jason R. Gary, the future of IBM Connections. Attending the conference we could admire him all clad out in pink.

However there is something more going on (and I'm not talking about his "don style" haircut). Besides the pink suit, Jason has been spotted in a deep purple jacket on several occasions, like his FossASIA talk. Digging deeper it seems IBM collaboration projects are now colour coded. Purple is chosen quite deliberately: The color purple is a rare occurring color in nature and as a result is often seen as having sacred meaning. Purple combines the calm stability of blue and the fierce energy of red. The color purple is often associated with royalty, nobility, luxury, power, and ambition. Purple also represents meanings of wealth, extravagance, creativity, wisdom, dignity, grandeur, devotion, peace, pride, mystery, independence, and magic.

You might have guessed it: it is the next generation of IBM Notes! Not one of the fix feature packs, but an entire new generation. Under the influence Jason admitted: "We took the Notes Client source code and compiled it with XCode for iOS. Guess what: it worked. Cocoa needs some work, but it isn't rocket science"

There you have it! After banning Notes clients from your desktop, instead of relying on the IBM Client Application Access, you just can launch IBM Notes Native for iOS??? on your iPad and continue working. Any improvements and updates are automatically rolled out using the Apple app shop. Availability will be April 1st, 2018.

We live in interesting times!

The Ministry of Manpower in Singapore is running a campaign "A new career at 55". Intrigued by it, I decided to give it a shot.

I will be joining Salesforce in Singapore as Cloud Solution Architect this Monday.

My 11 year tenure in IBM thus came to its end. With the new co-location policy sweeping though IBM, I realised, that staying in Singapore will not get me any closer to Notes than the December delivery of Verse on premises. Moving with my offspring in JC wasn't an option.

Working with the "Yellow bubble" always was fun and I intend to continue to participate there. Over the years the community propelled me to one of the top XPages experts on Stackoverflow, adopted my word creation XAgents and always made me feel welcome.

I had the opportunity to contribute code back to the community via OpenNTF on github. Check them out:

So let the adventure "From sensei to n00b" begin. See you on the other side!

When you look at "modern" programming styles, you will find novel concepts like isomorphic (runs on client or server), Idempotency (same call, same result), Immutable (functions never mess with the parameters or global state) or map operations (working on a set of data without looping).

I put "modern" deliberately in quotes, since these ideas have been around since Lisp (or for the younger of you: since you sorted all blocks by colour and size in kindergarden). In the Lotus world we got our share of this with the venerable @Formula language (the functions, not the commands), IBM Notes inherited from Lotus 1-2-3. While it has served us well, so far it has been confined to the realm of the NSF.

Not any more! Thanks to Connections Pink and the ever ingenious Maureen Leland, @Formula will come to a JSON structure near you soon. As far as I understood the plan: each @Function will serve as an endpoint to a (serverless) microservice that executes on values provided, returning a new value object that can be chained to the next call stream style. I'm very excited about this new development. Watch out for news about Connections Livegrid???.

Time for Maureen to undust her blog!