Bluemix is a beautiful environment for agile software development. Its build and deploy capability ensure continious delivery, so you can focus on code. A well run project requires automatic testing (starting with unit tests up to integration testing).
You can configure this in the Build and Deploy pipeline, so your project looks like this:

While you could argue: " I run my tests local", you might encounter the situation where you use the online editor and you then depend on the tests running in Bluemix. Setting up build and deploy is well documented and straight forward.

Tip: For Java projects you should use Maven or Gradle build, so your library dependencies are properly resolved. For Node.js projects a "simple" build would suffice, however using npm install would make the stage fail if your package.json has an issue, so you don't run later stages and fail there

However the documentation for the test stage simply states: " If you want to require that certain conditions are met, include test jobs before or after your build and deploy jobs. Test jobs are highly customizable. For example, you might run tests on your project code and a deployed instance of your app. ". That's a little " thin".
Inspecting the test job screen itself, we can learn that we have different testing options

I specifically like the Sauce labs integration and the ability to run a code, security and vulnerability scan (So a real pipeline might have up to 4 distinct test stages). However the screen for "simple" tests, where unit tests go, isn't particularily helpful: 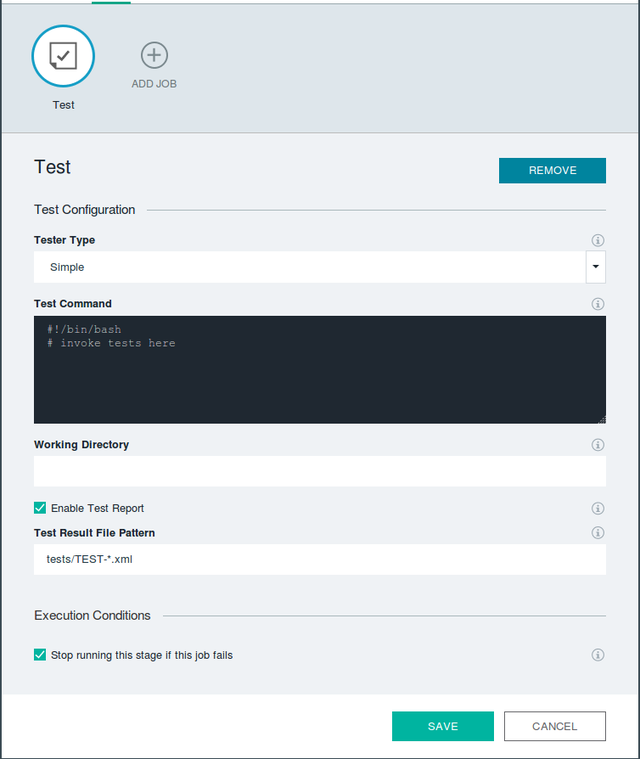 So lets shed some light on the inner workings.A test job can include a test report (including notifying SLACK, but that's a story for another time). This report needs to be in XML format, indicated in the default test results pattern. Old dogs will smell rat and conclude: ahhhh JUnit. And as a fact of the matter, JUnit report format is what Build & Deploy will process into a nice test result: 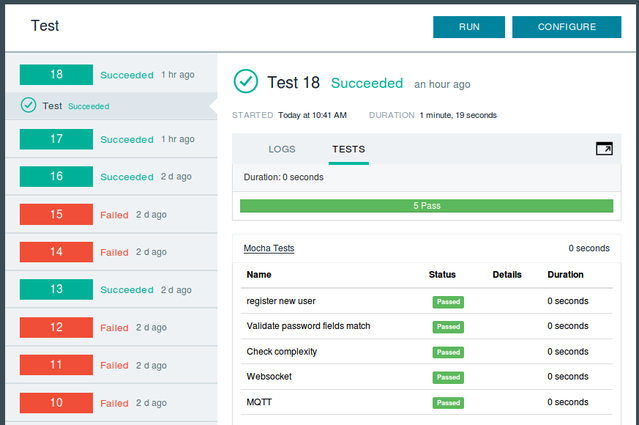 Running a JUnit test when you have a Java application is therefore quite simple. For front-end or Node.js applications its a little trickier, since you have plenty of choices.
Here is what I found when creating a test for an Ionic/Angular based front-end with an Node.js based backend: A sample test script as entered into the test job:

Configuring and coding the various tests is a story for another time. As usual YMMV