Enterprise architecture - from Silos to Layers

In a recent discussion with a client the approaches and merits of Enterprise Architecture took center stage. IBM for a very long time proposed SOA (service oriented architecture) which today mostly gets implemented in a cloud stack. While it looks easy from high enough above, the devils is in the details. Mostly in the details how to get there. The client had an application landscape that was segmented along a full stack development platform with little or no interaction between the segments or silos: 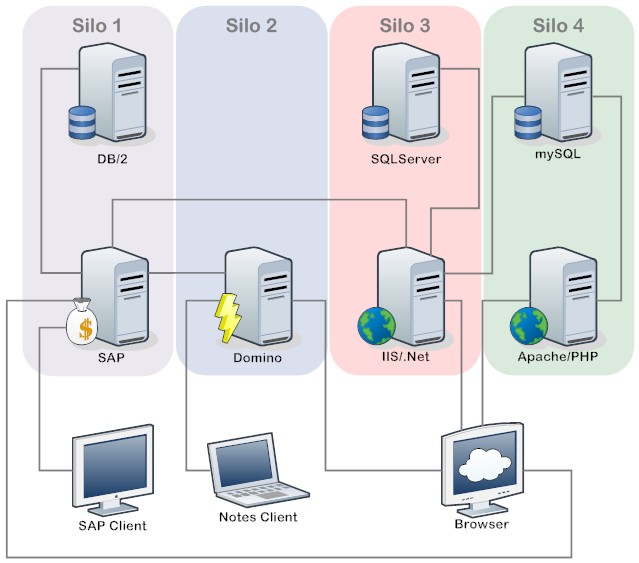 The challenges they are facing are: In the discussion I suggested to first have a look at adoption all principles to successfully pass the Spolsky test. Secondly transform their internal infrastructure to be cloud based, so when need arises workloads could easily be shifted to public cloud providers. The biggest change would be to flip the silos and provide a series of layers that are used across the technologies. A very important aspect in the layer architecture is the use of Design by contract principles. The inner workings of the layer are, as much as sensible, hidden by an API contract. So when you e.g. retrieve a customer information, it could come from SAP, Notes, RDBMS or NoSQL, you wouldn't know and you wouldn't care.This is important, so you can swap components in and out without breaking all application. The way more important aspect of clean APIs however is testability. Unit tests require predictable results. So being able to call a test API that has the same signature as the real is essential. When you call the real API, that's already an Integration test (of course the icing on the cake is BDD).
On the back of a napkin this is my recommendation: 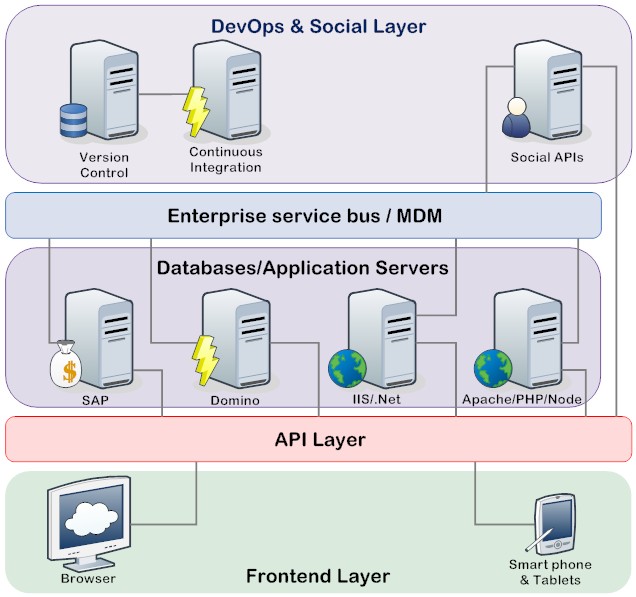 As you can see I didn't model out the database part, lunch and napkin were at the end and, while important for operation, the choice of databases doesn't alter the fundamental Ogre architecture principles. Let me elaborate on the layers: The list provided shall serve as food for thought, not as ultimate wisdom. About each of the items tons of books have been written, so fill in the details as needed.
As usual YMMV