Learning a new language or platform

The first programming language I learned was COBOL both using a Microfocus compiler (with an innovative tool called Animator, today commonly refered to as "Source level debugger") and on an IBM System /36. Until today I think Cobol is cool, not at least since you can reuse its source code, read aloud, as tranquiliser and only in COBOL this compiles without error:
PERFORM makemoney UNTIL rich.
You have to read "full stop" at the end to get all COBOL nuts laughing, because when you missed it, the compiler would mess up (they guy who invented automatic semicolon insertion in JavaScript must have been traumatised by that).
After that dBase, Clipper, Foxpro followed and soon VisualBasic. My early dBase very much looked like a COBOL program, while you could discover both dBase and COBOL thinking in my VB and LotusScript.
It is actually fun to look at source code and guess what was the previous language of the coder. It takes quite a while until old habits do die.
In case of COBOL, they never do, since we cleverly camouflaged the DATA DIVISION. as XML Schema to retain thinking in structured, hierarchical data.
So when you look at moving your applications to XPages, as a classical Domino developer, you are faces with quite some challenge: 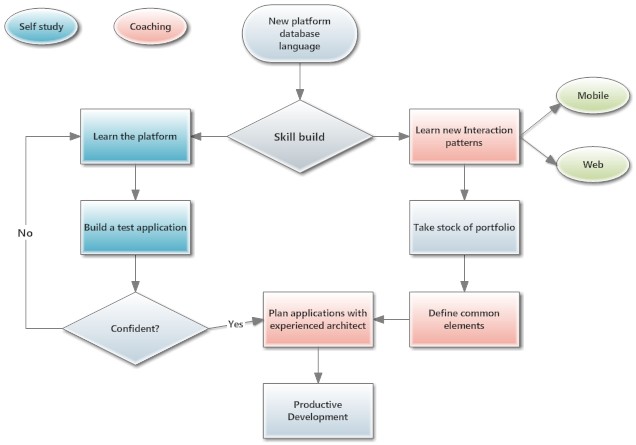 A common approach for skill acquisition is to entrust the very first introduction to a training or coaching session, in the vague hope that everything will sort out, right at the beginning. IMHO that is a waste of everybody's time, once a language or platform has been established for a while.
It is like signing up for a "Business Chinese conversations" class when you haven't mastered a single word yet (In case you want to learn Chinese, check out Chineasy).
A more sensible approach is to work through the basics and then discuss with a trainer or coach the best approach. This holds especially true in XPages, where some of the advanced stuff (ExtLib and beans, to name two) make development so much more easy, but scare off the novice developer.
So with 40h of video (yes, that's a whole work week - for normal mortals, for geeks, that's until Tue evening) there is little reason to join a class blank and slow everybody down.
Most developers I guided towards XPages had to (re)learn the mobile interaction patterns and the idea of a stateful web server (a.k.a JSF - not this JSF disaster).
The fastest transition to XPages and mobile apps happen, when the developers spend time on their own with the core platform, to then cross their swords with experienced designers. That's how it is done - so say we all.