How we successfully killed eMail (almost)

A recent conversation (in 140 characters or less) with Alan and a thought exchange with Luis got me thinking (again) about the death of eMail, namely the death wish the #SocBiz movement has for it.
When looking at the general discussion three items constantly get mixed up: The transport is a wild success and together with http holds the intertubes together. Innovation in the inbox (which I'm quite fond of) has been rather glacial (unless Store form in document Embedded Experiences, with their painful network dependency, are the next big thing). There areh a few pockets of hope.

. Kicking the habit is what #SocBiz is all about (yes - this is a gross simplification)

Of course all the software vendors, including my employer, the market leader in Social Software, will help you there with apparel, training videos and supplements, where you might need is just some coaching.
Reflecting on past projects back home, I recalled one where we actually almost completely killed eMail off - more than a decade ago. The customer was a project driven organization (projects like: build a new quarters in this town, build the biggest, tallest...) The secret recipe was this: 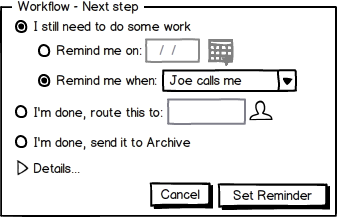 Messages would come in from the outside, via SMTP, SMS, pager, paper or Fax. They ended in a central processing database where they were enriched with meta data (manual in the beginning, with more and more automation / decision support later on) and assigned to a person to act on. Once a message was fed into the queue it would show up with the supplier, the project, the status, the document type.
Instead of sending gazillions of useless CCs to "keep people in the loop", users simply could watch any of the meta data of their choosing (and access rights of course). It would also allow to see if someone was swamped with actionables and help him out.
What was very interesting in the implementation project: We probably spend by a magnitude more time on defining the meta data structure and coaching adoption than on coding the tool.
We also had an army of nay sayers: " doesn't fit, it's against the law, our organisation is different, people won't change" etc. - This is why we spend all the time in implementation coaching. It took a year to finish, but work satisfaction and productivity went up greatly.
And I couldn't agree more with Alan: Less talking, more doing. A case for GGTD!