With Mobile First being the parole of the day more emphasis needs to be spend creating good mobile user interfaces. As much as the web is not print, mobile is not just a small desktop. Nevertheless we apply lessons learned from desktop interfaces to mobile devices and learn as we go along. Especially corporate development managers dream of write once, run everywhere (while we know that the best achievable case is write once, test everywhere). Some of the critical differences: So your UI needs to cater for that. On the other hand you could just have one UI based on mobile that you use on the desktop too. However short of using a widget tile, that approach looks silly and is less productive than a well designed desktop interface. One interesting facet surfaced this morning when discussing a mobile approval application: 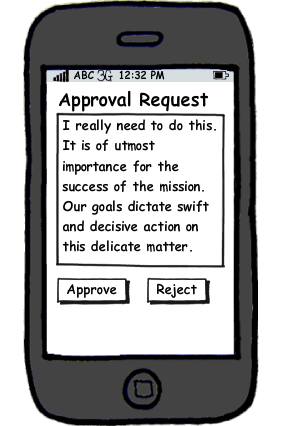 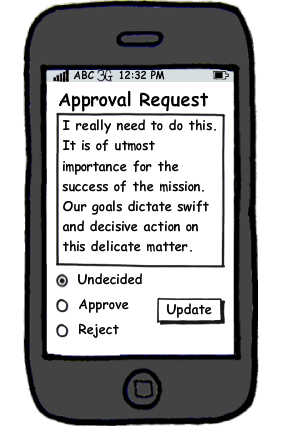 Is the typical pattern with an Approve and a Reject button the right approach for mobile? Surly it would feature one click decisions, a god sent for time plagued managers, of course only until you hit the wrong button due to a road bump. So alternate approaches are needed. One as pictured above would be to have a radio button (or its mobile equivalent) and the button. Another possibility would be to switch from the request screen to one that lets the decision maker add a comment and finalise the answer: 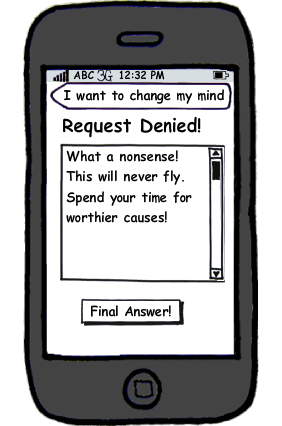 Still the challenge remains what contextual information to show with a request, but that's a story for another time.