being multilingual has the clear advantage of being able to pull from a larger pool of philosophers. One of my recent favourites is fellow IBMer Gunter Dueck. He has written a number of books

, runs a YouTube channel and has coined his own philosophy called Omnisophie. His blog/newsletter/thought collection is aptly labelled Daily Dueck.
His latest entry is titled ?chtet die Dringendmacher! which you can translate to "Ban the Urgentors" (I took the liberty to create this new word Urgentors by fusing " urgent" and " tormentor" where they overlapped). The Googlish produces good giggles when you can grasp the German original and shows that machine translation isn't up to par with a wortgewaltig author.
Dueck pokes fun and bemoans the nuisance of people planning time poorly and then turning each request into an urgent action with complete disregard for the time of the receivers of their requests. Quoting Covey

he reminds us, that efficient work happens when something is important, but not urgent. His examples are hilarious: a request sent 2am for the board meeting in the morning asking for an absolute useless statistic, a student asking for an overnight review of his master thesis that took him 3 years to make and a task force that will neither contribute to the bottom line, the core values nor reduce suffering. 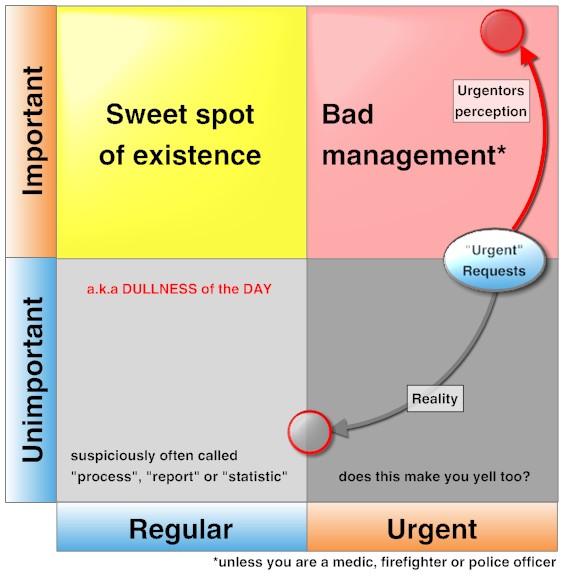 A lot of these Urgentors are totally unorganised people dallying away, suddenly realising that they urgently need to do something that requires other people. But there are additional archetypes available: the secondary urgentor who relays requests, adding some urgency to it; the neurotic urgentor: it has to happen now, because I say so; the sadistic urgentor who takes revenge just having escaped the receiving end of another urgentor; the management urgentors who believe that a pressure cooker not only works for food but also for people, the clueless urgentor who drank the Information at your fingertips cool aid and last not least task force and management staff who can't believe that others work hard too.
The prevalent urgentor however is just clueless, reckless and incompetent free from any awarness for the consequences of their actions. Often they are victims of other urgentors who numbed down the insight that unless they drop the habit the best results they can hope for are second class only.
Dueck suggests the remedy for these time pressure creating behaviours starts with oneself: check which of your own actions qualifies as urgentor's finest and stop them - a notion I wholeheartedly can endorse. The world isn't hectic by default, not even a quarter end - I can tell you the dates decades in advance! The going wisdom in business however is: Christmas every year comes as a sudden surprise. Dueck closes with an interesting perspective: the backbone of Germany's economy is " Der Mittelstand" (small and medium enterprises) which is very resilient avoiding the myoptic view " until this quarter end" thus preserving its sustainability. On the other hand complaints are plenty in large enterprises and government about short term thinking mentality (you get what you measure?). Eventually IBM shouldn't celebrate their 100th anniversary, but the completion of 400 quarter closings.