A stroll along Shanghai's Nanjing road

IBM's Shanghai office is in the Pudong district. To get to famous The Bund, the scenic river promenade I took the "The Bund Sight Seeing Tunnel". It turns a four minutes ride under the river into a bath of light and color. Highly recommended. After a stroll along The Bund I turned into Nanjing road. Quite a long part of it is a pedestrian area and feels very European. Except the merchandise in the shops and the fact that every 2.5 meter someone shows you flashcards of designer brands recommending "Cheap, cheap how much do you want to buy". This is funny for the first three or four times and can get pretty annoying after a rather short while.
It turned out that the problem carried the seed of the solution. Two more girls stopped me and after my initial bu yao assured me, that they just want to talk to practice English. Well, didn't sound very convincing to me, but following some recent advise I took the statement at face value. It turned out that this was a lucky move. It looks like that all the peddlers recognize each others and as long as I strolled with the girl I wasn't approached anymore. We had a good chat and I learned a lot about their live, their work and their families, at least as English as it is broken allowed us to communicate. Having European manners I invited them for dinner at a restaurant at Nanjing road, which they happily accepted. The recent slowdown in tourism (getting a China visa is quite difficult now unless you have an Olympic ticket, which would send you to Beijing anyway) and thus their business left them hungry. 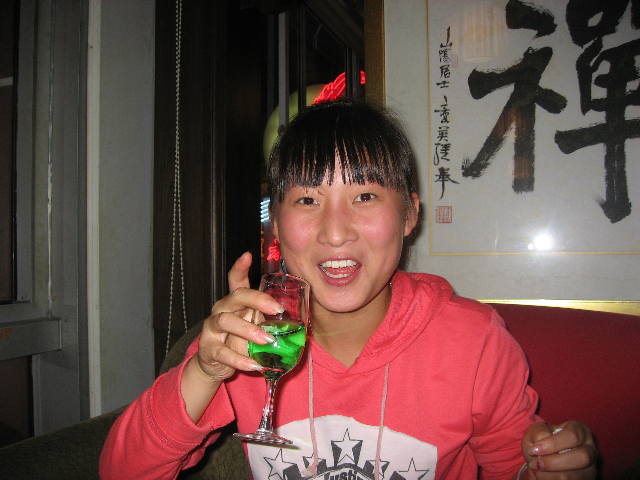 Could you imagine, that this girl, without blinking, eats 20 chicken wings, one big bowl of fried rice and three platters of mixed fruits. I haven't seen a more happy face for a long while. Made my day.