When a mouse goes bad

I had for about 5 years now an IntelliMouse Explorer. It served me well and its size nicely fitted into my pawns. A few days ago it started to act strangely. As if the ball was full of dirt (it is an optical mouse). Also -- now I know it is related -- for a couple of days I had the issue, that Explorer would freeze. The mouse would move but nothing would be clickable. However running application would be selectable with Alt+Tab or even applications on a hotkey would launch, except task manager. The system also would not react to external drive mapping or a shutdown request.
This morning the mouse died. No mousepointer movement, finito, basta. So I replaced it with a spare (a compact optical mouse, much to small for my hands) and wonder oh wonder no more hell freezes over Explorer freezes. Mental note: even an optical mouse does age. 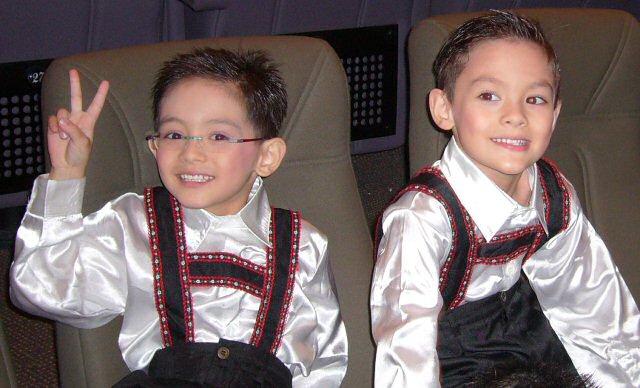 The Kindergarden had it's Song and Dance event. Coincidential Anthony and Ernest had to dress up in "Lederhosen".

It is Christmas and not "the festive season". Events have names and shouldn't be blurred in meaningless summary terms. For my part I'll stick with "Happy Christmas", "Selamat Hari Raja", "Happy Hanukah" and "Happy Deepa Vali". And I do miss the snow.

eMail traffic swells during the festive season to transport all the eCards. Since it is quite difficult to distinguish between true greetings and all sorts of maleware I usually don't bother to open them. Today one arrived from a very big consultancy with the familiar " .nsf/0/" inside the URL. So I curiously had a look. Seems like they encourage their staff to use the facility instead of moving to a less trustworthy external service. Nice move, now I need to educate them how to secure such an application!

There has been a lot of press about Singapore's dealing (pun intended) with drugs. Today I had a chance to look at the other side. The Central Narcotics Bureau has a set of ongoing activities to prevent you from getting started on drug use.

Together with Adamsapple they started an animation competition for schools and tertiary education about drug prevention. I was invited to be on the panel of judges to rate the competition entries. We had a look at the entries in three categories: primary schools, secondary schools and tertiary education. Judgement criteria were items like: story line, visual apperance, clear message, creativity and innovativeness.

It was refreshing to see how clearly the students saw the issues that lead to drug addiction (at least here): stress & pressure, curiosity, peer pressure, personal difficulties, social context were clearly mapped out. Being Singapore a recurring theme was the risk of being imprisoned. One entry however, which I liked best, highlighted the self responsibility as core of a drug free life.

What Muppet are you?

What Muppet are you?

You are Dr. Bunson Honeydew.You love to analyse things and further the cause of science, even if you do tend to blow things up more often than not.HOBBIES:Scientific inquiry, Looking through microscopes, Recombining DNA to create decorative art. QUOTE:"Now, Beakie, we'll just flip this switch and 60,000 refreshing volts of electricity will surge through your body. Ready?" FAVORITE MUSICAL ARTIST:John Cougar Melonhead LAST BOOK READ:"Quantum Physics: 101 Easy Microwave Recipes" NEVER LEAVES HOME WITHOUT:An atom smasher and plenty of extra atoms.
Take this quiz!

A new experience for a conference beginning: An Imam was chanting a Quran sura. What a charming twist: The energy in the confernce room changed, everybody calming down. Pakistan has a rapid growing ICT usage doubling their mobile phone users in less than a year. They are hungry and want to move. However catching up with the rest of the world is tricky, especially when your neightbor is an IT powerhouse like India.

Back to the 90ties

Unexiting as usual I endured 9 hours of boring flight and a rush stopover at Dubai. This is such a pitty to rush trough Dubai's duty free, since it is one of the few places where you can pick up a new Ferrari or Rolls Royce when passing by (ok - my credit card doesn't have that kind of limit).
I'm staying at the Carlton in Karatchi and it feels like late 80ies or early ninties...
No Internet in the room, normal keys, digital aircon (on or off) and so much static on the phoneline that dialup wouldn't work.
Without GPRS I would be stranded. Digital Divide anyone?

"Bridging the digital divide" will be the keynote address I will deliver on the ConnectIT Conference in Karachi/Pakistan on Friday. I'm speaking on behalf of the Association of Telecom Industries Singapore ( ATIS).

I'm using del.icio.us for a while together with the Firefox plug-in. Recently some peers and I decided to give del.icio.us a spin as a website notification tool. Whenever a website is supposed to catch attention we flag it with the users nickname. My is NotesSensei. So if you want me to have a look at a specific page, just tag it in del.icio.us with the tag " NotesSensei".

User Centred Design --- without the users?

I'm a member of the Usability Professionals Association as well as a member of the World Wide Institute of Software Architects. Both communities discuss the need for user centred design. Looking at our favourite development process (make your pick: XP, Agile, RUP or whatever acronym you fancy) the users' requests always come first. While I think this is an important concept I sometimes feel uneasy about it. In most of my software projects we end up with features and design the users haven't asked for but highly appreciate. Actually I consider implementing exact user requirements as a failure.
Kathy "Headfirst" Sierry sums it up nicely in her latest post:
The goal is to add sliders that turn out to be really important to users. And I say "turn out to be", because the most daring breakthrough products and ideas are rarely driven by user requests.
Go read it.

Update:Thx to Ganapathi to point out the typo, fixed now.